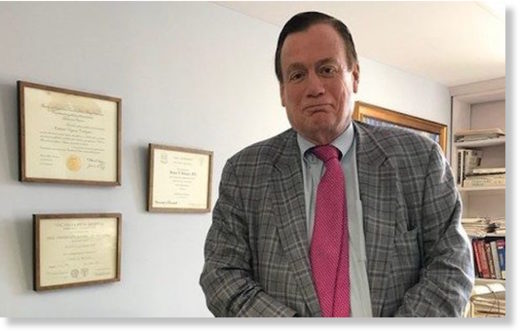 We now have another very similar case – a Yale trained psychiatrist, Richard Gallagher, who has fallen for his patients delusions that they are possessed by demons. His editorial in the Washington Post is stunning for its utter lack of skeptical awareness.

I am sometimes questioned by well-meaning but confused scientists who do not understand the role that scientific skepticism plays in society. Isn’t science itself enough? Aren’t all scientists skeptical, or at least they should be?

What they miss is that skepticism is a real and deep intellectual skill set that works with science. It includes specialized knowledge that is not necessarily acquired during scientific training. There are frequent examples of this, and Gallagher’s article is now a prime example as well. He hits almost every true-believer trope there is. Ironically he has created a classic case study in the need for scientific skepticism.

So I was inclined to skepticism. But my subject’s behavior exceeded what I could explain with my training. She could tell some people their secret weaknesses, such as undue pride. She knew how individuals she’d never known had died, including my mother and her fatal case of ovarian cancer. Six people later vouched to me that, during her exorcisms, they heard her speaking multiple languages, including Latin, completely unfamiliar to her outside of her trances. This was not psychosis; it was what I can only describe as paranormal ability. I concluded that she was possessed.

He may have been inclined toward cynicism, or what he thinks of as skepticism, but clearly he does not understand skeptical principles.

Here he is making the case that, in rare cases he has investigated, the allegedly possessed displayed knowledge that is unexplainable without invoking demonic possession. Let’s count the logical fallacies.

First, he makes an argument from personal incredulity. Because he cannot explain a phenomenon, he thinks it is unexplained.

He goes from that fallacy to confusing unexplained with unexplainable. He then makes the argument from ignorance to fill in the alleged gap with his preferred belief, demonic possession. This is a very common true-believer trifecta, which is often wrapped in faux skepticism.

Gallagher could benefit immensely from even a basic understanding of cold reading and mentalism (not part of psychiatry training). Cold reading is the technique of seeming like you have specific knowledge when you don’t. It might include making a statement that is likely to be true of most people, or seems specific when actually it is quite general.

Saying something like, “you have a secret sin,” is a perfect example. Who doesn’t? This is like saying, you have money concerns, or sometimes you feel insecure.

For the past two-and-a-half decades and over several hundred consultations, I’ve helped clergy from multiple denominations and faiths to filter episodes of mental illness — which represent the overwhelming majority of cases — from, literally, the devil’s work.

This is another common fallacy I call the residue effect – sure, most UFO sightings (or bigfoot sightings, or spontaneous healing, or whatever) are fake or misinterpreted, but there are a few cases that cannot be explained. Those cases are real.

That logic is invalid, however. When you look at hundreds or thousands of cases, you are going to see common things commonly, and then more rare things more rarely. If you have seen a hundred cases, you have likely seen one which is a one-in-a-hundred case.

Rare, however, does not mean paranormal. Rare could mean, a cold reading that was incredibly lucky. Or perhaps the patient (let’s not forget, these are mentally ill patients), happened to hear people talking about something when they thought the patient was not paying attention, because they looked unconscious or in a trance, and then later the patient feeds back that information as if Satan himself fed it to them.

This is not even unlikely. Mentalists do this on a regular basis – on demand, even. If you think guessing how someone’s mother died (actually just giving the illusion that you did) or that someone is guilty of the sin of pride, then you really need to see a good mentalist in action.

A possessed individual may suddenly, in a type of trance, voice statements of astonishing venom and contempt for religion, while understanding and speaking various foreign languages previously unknown to them. The subject might also exhibit enormous strength or even the extraordinarily rare phenomenon of levitation. (I have not witnessed a levitation myself, but half a dozen people I work with vow that they’ve seen it in the course of their exorcisms.)

I have also heard patients voice statements of astonishing venom. I am sure Gallagher knows that mentally ill does not mean ignorant or unintelligent. I have met patients who had an uncanny social sense for other people’s vulnerabilities. If you spend a lot of your mental time thinking you are possessed, some will probably get good at it.

Speaking languages they did not previously know – that is an extraordinary claim. All Gallagher has to offer as evidence is stories. Perception and memory are incredible flawed, especially so in a highly emotionally charged situation. How long had those attending the allegedly possessed kept their vigil before the interesting stuff started to happen? How sleep deprived were they? How willing to believe?

It’s also possible that a patient might memorize Latin phrases to throw out during one of their possessions. Were they having a conversation in Latin? Did they understand Latin spoken to them? Or did they just speak Latin?

I have heard the claims of enormous strength before, but all (and I mean all) of the video evidence I have seen did not demonstrate this. During one exorcism taped for a TV documentary, the voiceover said that the subject displayed supernatural strength; meanwhile they were being held down by two old ladies who did not seem to be struggling.

I have literally watched dozens of hours of exorcisms on video. They are all incredibly boring. Nothing interesting happens. No levitations.

Here Gallagher makes his most embarrassing statement, a “friend-of-a-friend” claim for levitation. He has never seen it, but other people have? What did they see, exactly? Was the person just arching their back and bouncing off the bed?

As with ghost claims, bigfoot claims, and the like, we always hear fantastic stories, but the interesting stuff never ever seems to happen when the cameras are rolling. Gallagher has an answer for this also:

One cannot force these creatures to undergo lab studies or submit to scientific manipulation; they will also hardly allow themselves to be easily recorded by video equipment, as skeptics sometimes demand. (The official Catholic Catechism holds that demons are sentient and possess their own wills; as they are fallen angels, they are also craftier than humans. That’s how they sow confusion and seed doubt, after all.) Nor does the church wish to compromise a sufferer’s privacy, any more than doctors want to compromise a patient’s confidentiality.

These are all classic excuses for lack of evidence, and nothing more. How do they not allow themselves to be recorded? Especially now with cell phone cameras – how could they stop the recording?

Confidentiality sounds like a legitimate concern. However, if a patient were not mentally ill but in fact were possessed, and they levitated feet above their bed in proof, they would probably agree to releasing the video at that point as evidence. Plus, doctors videotape their patients to show to other doctors all the time. Recording for scientific or educational purposes, with proper consent, is perfectly legitimate.

But demons are crafty. Right, and aliens are super intelligent, and bigfoot can teleport, and psychic powers don’t work in front of skeptics. We have heard it all. These are all just lame excuses (post hoc rationalization) for lack of evidence.

This always reminds me of the documentary about a satanic witch hunt in Texas where the “investigator” proclaims: “These people are master satanists. The fact that there is no evidence just proves that they did it.”

Richard Gallagher is now a classic example of how even a highly trained professional can fall prey to bad logic and the desire to believe. He nicely demonstrates why basic skeptical knowledge is necessary, even for scientists and professionals.

He finishes with an appeal to gullibility for the sake of the victims:

Those who dismiss these cases unwittingly prevent patients from receiving the help they desperately require, either by failing to recommend them for psychiatric treatment (which most clearly need) or by not informing their spiritual ministers that something beyond a mental or other illness seems to be the issue. For any person of science or faith, it should be impossible to turn one’s back on a tormented soul.

This is like every snake oil salesman who says they are too busy treating patients to do proper research. This is not an excuse for lack of skepticism, but all the more reason for it.

I can easily turn the tables on his logic – what if these are all just mentally ill patients with firm delusions, who happen to be smart and clever enough to do a decent cold reading? By accepting their delusion, you are reinforcing it, making it even harder to treat. You are victimizing the people you are supposed to be helping, by failing in your primary duty as a professional to be detached and evidence-based.